When English refugees who fled Queen Mary’s Catholic regime translated the Bible into English, the Exodus narrative seemed to fit their circumstances. The Geneva Bible (1560) featured a woodcut of the exodus on the cover, and this same image appeared in the book of Exodus and before the New Testament. God worked physical salvation for Israel at the Red Sea, and the repeated use of this image emphasised the event’s importance for Christians. Two verses framed the woodcut: 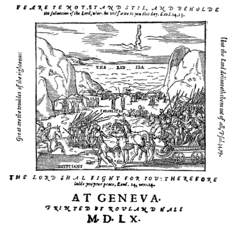 Horizontal: ‘Feare ye not. Stand stil, and beholde the salvation of the Lord, which he wil shewe to you this day. The Lord shal fight for you: Therefore holde you your peace’ (Exod. 14:13–14).
Vertical: ‘Great are the troubles of the righteous: but the Lord delivereth them out of all’ (Psalm 34:19).

Because the godly were righteous (Psalm 34:19), they could expect God to fight for them (Exod. 14:13–14). This post recounts how Moses’ command was remembered between 1560 and 1660. I argue that changing political circumstances, coupled with minor alterations to how the text was understood and applied, inverted the application. Ironically, an admonition to wait on God became a justification for war. Christians conveniently forgot that at the Red Sea, Israel obeyed Moses’ command by not fighting. God alone fought. Although these Christians remembered that the victory came from God, many now thought they had to fight to secure it.

Dozens of works from 1560 to 1660 invoked these verses to encourage Christians to  await salvation patiently. Troubles might be spiritual (doubt, despair or temptation) or physical (tempest, persecution or sickness). Importantly, eternal salvation through Christ was a greater exodus. For this reason, the Church of England still reads Exodus 14 every Easter. According to Henry Ainsworth’s Annotations from the Hebrew (1622), this command to hold your ‘peace’ meant the Israelites were to ‘cease from speaking or doing any thing in this battell’.

Exodus 14:14 appeared on another cover, this time in 1643. The anonymous Powers to be Resisted (printed in London for Henry Overton) sanctified ‘Parliaments lawfull Resistance’ and chillingly declared ‘that Archbishops, Bishops, Curates, Neuters, all these are to be cut off by the Law of God; Therefore to be cast out by the Law of the Land’.

How did verses that linked obedience with not fighting come to form part of a call to ‘cut off’ Parliament’s opponents? This post describes this evolution from 1560 to 1660. Did people forget that the command to ‘stand still’ involved not fighting? Could remembering the exodus involve stoically standing in resolute armed opposition to God’s enemies?

Third, eschatology proved critical. Thomas Brightman’s A revelation of the Apocalyps (1611) said ‘The time is short: stand stil, and behold the salvation of Iehovah, which he wil work for you within these few yeres’. Brightman linked biblical past with apocalyptic future and foregrounded human agency in the divine plan. An eschatological twist on Exodus 14:13–14 featured in many works, like Thomas Stoughton’s The Christians sacrifice (1622) and Thomas Taylor’s Christs victorie over the Dragon (1633). After the death of Gustaf II Adolf, eschatological fervor sharpened the call for Protestant warfare (Anon., An alarme to all Christian princes and states of the religion [1632]). This famed Swedish king was a major leader in the Thirty Years’ War, and his death in Battle of Lützen (November 1632) dealt a blow to the Protestant cause in Europe.

Finally, several authors paired Exodus 14:13–14 with Gideon’s victory over the Midianites (e.g. Joseph Hall [1615 and 1625], Thomas Taylor [1635] and Thomas Temple [1642]). Gideon was one of Israel’s leaders before the time of the kings (as described in the book of Judges). Despite his doubts, he obeyed God’s call to intentionally weaken his forces before attacking the Midianites. His soldiers cried that it was ‘The sworde of the Lord and of Gidéon’ (Judg. 7:20; italics added to the Geneva translation). This verse was emblazoned on some parliamentary battle flags. The Gideon narrative emphasised that God’s fighting involved human instruments. Pairing Gideon with the Red Sea thrust human lethality into a narrative where no Israelites physically killed their enemies.

These factors set the stage for the anonymously published Powers to be Resisted (1643) that called for ‘Archbishops, Bishops, Curates, Neuters, all these are to be cut off by the Law of God’. That same year the verses featured in a resistance tract by William Prynne, and ‘stand still’ was thundered from prominent pulpits by influential ministers like Jeremiah Burroughs and Thomas Carter. They also appeared in The souldiers pocket Bible, a small work distributed to soldiers and intended to ‘supply the want of the whole Bible’. Moses’ warfare took centre stage in the work, and Jesus was nowhere mentioned.

Partisans soon wielded Exodus 14:13–14 for competing causes. The verses appeared in over one hundred printed works during the Civil Wars, Interregnum and early Restoration. Many urged their co-religionists to ‘stand still’ and ‘wait’ for salvation. The commendation of patient faith transformed into a political clarion call. Remembering Moses’ command to ‘stand still’ involved fighting in faith for God’s kingdom on earth.

A letter from after the Restoration illustrates the politicization of these verses (SP 29/122 f.45). Joseph Walley was a bookseller in London and York. Authorities arrested him in 1665 and searched his private correspondence after they found a letter he wrote to brethren in Christ about their ‘duty’ in present circumstances. The letter described impending judgement on God’s enemies, and Walley told his friends that they must ‘prepare for deliverance’. The faithful, Walley wrote, were to ‘stand stil and see his salvation’. After decades of polarised application, ‘stand stil’ sounded seditious.

As the British Isles slid into war, partisans not only chose which biblical narratives to inhabit (like the Red Sea), they also determined how they would inhabit those accounts. They took an admonition to ‘stand still’ and repurposed it as a justification for war. Many strategically forgot the original Exodus context as they pressed Moses’ command into the service of a new cause. It was no longer enough to witness God’s salvation; one needed to fight for it.

Erasmus, the famed early modern humanist, said in Praise of Folly that Scripture was like a wax nose that one could twist at will. Although some did—and still do—approach the Bible this way, this does not seem to explain the migration of meaning described above. Perhaps Kevin Killeen provides a better illustration in The Political Bible in Early Modern England when discussing the reception history of other scriptural passages: ‘The verses were, in their way, a Rorschach test—the political psychology of the observer emerging in how they responded to the text’. Interpreters of Scripture, then and now, are embedded within a tradition of reading and influenced by outward circumstances, and it is little wonder they remember the Red Sea differently.

Comedy and Memory in Foxe's Book of Martyrs

From Fratricide to Revival: Forgetting the Origin of an Evangelical Saying, 1642–1889

The Sound of the Reformation